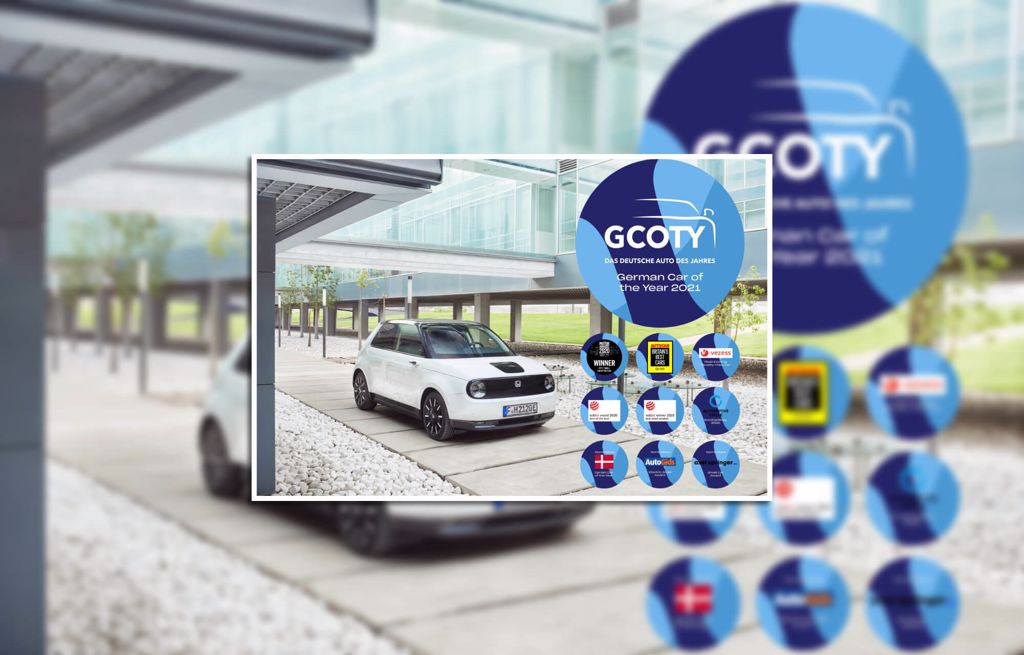 Honda’s first battery electric vehicle for Europe, the Honda e, has been named ‘German Car of the Year 2021’ in the country’s prestigious annual Car of the Year Awards, becoming the first vehicle from a Japanese brand to do so. The car also won in the ‘New Energy’ category.

This is the latest in a series of prestigious accolades to be given to the Honda e since its launch in Spring 2020, including the top honour in the Red Dot Design Awards.

The German Car of the Year awards are decided by a jury of leading German car journalists. The panel tests and reviews the latest cars, ranking them according to their usability, driving characteristics, market relevance and level of innovation. The winners of five categories – Compact, Premium, Luxury, New Energy and Performance – then go head-to-head to decide an overall winner.

“For Honda e to be the first Japanese car to be awarded German Car of the Year is a great honour and one we are incredibly proud to receive”, added Katsuhisa Okuda, CO & President of Honda Motor Europe. “Customer and media response to the Honda e since it was first unveiled has been overwhelmingly positive. The Honda e is a perfect example of a product with a unique design, featuring cutting-edge technology and advanced intelligent connectivity to keep owners connected with their everyday life. We are very thankful for this award.” “Honda e represents a new type of mobility where the car plays a central role in creating a “seamless connection” between various facets of life.” commented Tomofumi Ichinose, Honda e Large Project Leader.

“Honda e was also developed to be the best urban commuter in response to environmental issues, especially in city areas. Development of Honda e was a big challenge, however at the same time, it was fun to envision a beautiful and brighter future in which Honda e plays its part. Team members and I are delighted to receive this award, a recognition that the vision this car represents has value.”

This latest award for the Honda e follows notable success and recognition from across Europe. In the UK, the Honda e triumphed in Autocar’s ‘Britain’s Best Car’ Awards 2020 in the ‘Best Car Tech’ category, and it was recently named ‘City / Small Car of the Year’ in the News International Motor Awards 2020.

In Germany, the Honda e has also added a EuroCarBody 2020 award from Automotive Circle to its German Car of the Year title, just months after receiving two prestigious Red Dot awards for outstanding design, including top ‘Best of the Best 2020’ honours. The Honda e has since been on display at the world-renowned Red Dot Design Museum in Essen, Germany.

In Belgium, Honda’s urban electric supermini has been nominated for an Autogid Magazine award, in the ‘Electric Small’ category, and is also in the running for ‘Hungarian Car of the Year’, after being named the ‘Most Exciting Novelty/New Car’ by Vezess.hu last year. Elsewhere in Europe, the Honda e has been nominated in Spain’s Axel Springer Motor Awards in the ‘small cars’ category and in Italy it’s in the running to be named Quattroruote’s ‘Car of the Year’. Meanwhile in Denmark, the car has been shortlisted for Denmark Car of the Year 2021.

The Honda e is an important model in Honda’s commitment to electrify 100% of its European mainstream models by 2022. Setting new benchmarks for contemporary car design and advanced e-mobility, the Honda e has been designed without compromise with a focus on functionality and usability. It features a seamless, sleek and modern appearance, with cutting-edge technology and advanced intelligent connectivity to keep owners in sync with everyday life.

The Honda e is available at the following dealerships nationwide: